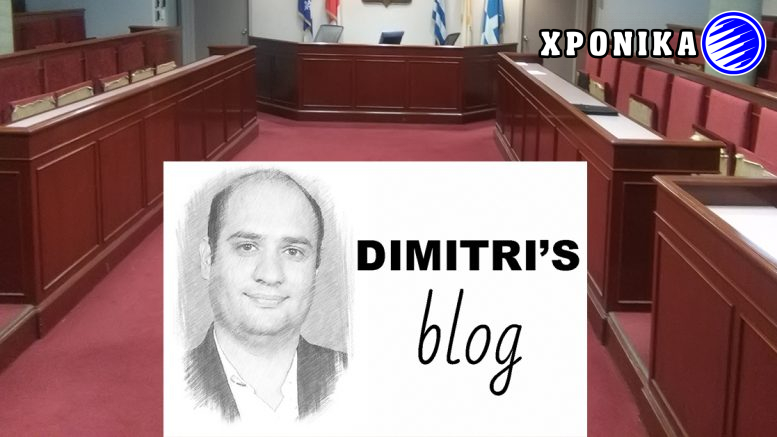 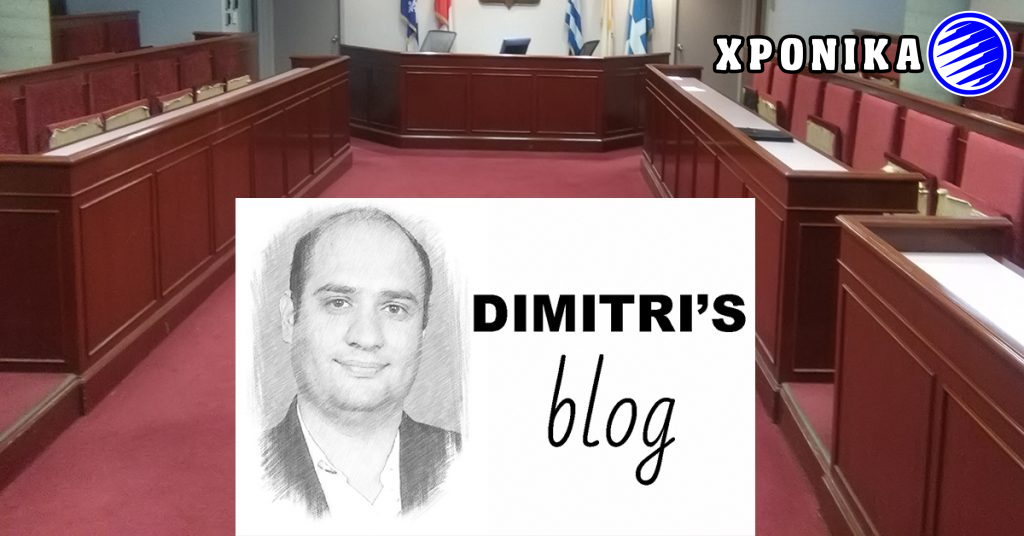 (this article was originally published in Greek here)

Those who listened to last Saturday’s Greek broadcast on CFMB 1280 AM with guest the former Public Relations BoD Member of the Hellenic Community of Greater Montreal (“HCGM”), better known as the Department of Divisive Relations, confirmed that now, after his mysterious resignation, the man carries the exact same baggage of the current problematic HCGM BoD and is willing to continue the exact same power-trip with Greek Community Media in the new team he is about to join – either the Doctor’s or the Syrros’s! (It’s not improbable that the two will merge to make up the required 51 people to form a full team for the upcoming community elections).

When asked by Michael Tellides if he would solve the long standing issue that the HCGM has created with the media and particularly the “Papadopoulos issue” – he was extremely hesitant and called me “inflammatory” – in short, problematic. In other words, we will have exactly the same problems with the media.

But because he has an incredible eloquence of speech, outstanding talent for emotional storytelling, charm, and a remarkable way of demagoguing with nonsense and emotions that caress the ears, the essence went unnoticed.

He implicitly stated that where he is going he will continue the exact same line of the current problematic BoD. On the other hand he claims to “disagree” with the communications policy of the HCGM. But he didn’t say anything specific. He simply stated that the temporary closure of the membership registration website was the “excuse” he resigned from the current BoD, not the cause! He did not say the cause.

But at least he’s honest, and he made it clear from the get-go: He will be more of the same as far as Public Relations is concerned!

The HCGM needs people capable of doing GOOD public relations, not deliberately putting the media, local community bodies and members against them – because that’s the way they want it – resulting in pissing contests from all sides, and thus discrediting the organization.

Since they removed the late Foti Komborozo as the organization’s public relations officer a few years ago, the Hellenic Community of Montreal has ceased to have a functioning public relations department. And in the last 4 years that department has completely ceased to function as a PR department. Since then, not only does it not do good PR, but both the employee of this dysfunctional office and the two BoD Members in charge of PR and marketing, have only managed to ruin their relations disastrously with all the Greek Community Media in Montreal, and by closing access for media coverage !

Also, the Community Bosses have banned media from access to the organization and Board meetings on the rationale of sending out ready “tailored” news releases of what is going on in the organization for the media to republish !

Because the media reacted strongly in the light of the unacceptable operation and incompetence of the PR office, and more so the weekly newspapers – even taking away one of the two community pages that are provided pro bono to the HCGM to publish it’s weekly newsletter, the bosses of the PR department responded by publishing their own 16-page bi-weekly tabloid HCGM newspaper, at an unjustifiably huge operational cost.

In this HCGM newspaper, the community bosses believe they are exclusively promoting the activities of the Greek Community of Montreal. But in reality, as it turned out, this HCGM newspaper is not popular and has no influence on public opinion, on the visibility of the organization or on the promotion of activities. Also, because the activities of the organization are not open to the media because of the exclusivity that enjoys HCGM’s Newspaper, this makes it impossible for journalists to know what’s happening in the HCGM and nothing positive is being reported. All that is heard from the media is harsh criticism of the incompetence of the Board of Directors and the Public Relations Department of the Hellenic Community of Montreal.

And unfortunately, public opinion and the overall image is very negative towards the organization, with consequences for the schools as well.

This constant harsh criticism against the Board by the media has resulted in the BoD members taking a defensive and hostile attitude towards the media, and the situation has reached the point of discrediting the organization.

They are power-tripping – and continue as ‘planned’!

The HCGM Bosses with their appalling behavior have pushed away Mike-FM reporter Adoni Houdala, discouraged CFMB reporter Soula Tellides, challenged ALL the editors of the community newspapers, and kicked me out of the community – worst of all, the HCGM Rulers don’t have any intention whatsoever of restoring public relations with anyone!

After all, the Community, and especially the PR Office, considers the media to be in direct competition with their HCGM newspaper, and they see no reason why they should have good relations with the media.

Public Relations has failed miserably to the point of betrayal

The irony is, that the former Public Relations BoD member who resigned in order to join a new party, intends to continue with the same irrational thinking in the new team he plans to join, possibly because he himself is ignorant how Public Relations work. If you ask him about the HCGM’s newspaper, he considers it as one his “achievements”! He considers it an accomplishment to have the organization Circle Jerk and congratulate themselves “exclusively” in a non-existent HCGM newsprint instead of having the activities widely promoted by all the media! He prefers to have the HCGM to “compete” with the media and have them shooting at them from the outside!

If there had been a functional PR office, in the last two years of draconian government restrictions and lockdowns, the community leaders would have invited the media to conduct regular press conferences with live links – which I could have offered the technical part myself pro bono for all the radio and TV stations from the HCGM’s Board Room, side by side with various agencies, doctors, experts and politicians (with physical presence – there was an exception). Our so-called leaders would have then addressed the Greater Greek Community, on-air live from the HCGM Headquarters, to inform the community that our Greek Community Leadership is there for any needs with the Social Services, and in general, they are there for everyone during this very difficult crisis. This never happened.

Effectively, they missed such a golden opportunity to become heroes during the pandemic!

Instead, they continued their clowning around and during the harsh lockdowns, they went into a long hibernation state. But they did manage to pull a couple of millions of dollars from the COVID-19 relief fund grants from the government for alleged services they supposedly provided during the crisis that no one knows about. Taxpayer money – which as they stated on the radio, they’ve “put in the bank” and are now doing financially better to be able to decorate the banquet hall with inflated bills from a non-existent company.

This COVID government relief fund is grated for operational costs to make up for the losses incurred during the lockdowns; not to be put in the bank and used later for unrelated “costly” improvements or extra construction works – which may or may not include kickbacks. (let’s be honest). If no “loss” was incurred during the pandemic, then, there was no reason to claim millions of taxpayer money.

Taking advantage of relief funds for improving one’s financial situation with taxpayer money, as the vice-president of the HCGM said on the radio… is unethical at best.

Just that alone calls for a UPAC forensic investigation for misusing public funds and hold each BoD member personally liable for reckless spending without budget approval.

Although, I’m not sure this problematic Board of Directors wants to have contact with the community, if they wish to contribute to the community, or accept volunteer work. In general, I question the purpose of this troubled board, and wonder what the real reason for its existence is.

What the Greek community organization needs is to open the doors again to members and the media, abolish their non-existent costly newspaper, establish good relations with local community bodies, and invite journalists to report on stories so that the good works and contributions of the organization can be spread at large – instead of hearing a divisive vine of discord and complaints from all over the place, as they have managed to do today.

I invite you to see a Television News Report below that I made in 2001 which was aired on CFCF-12 (CTV Montreal), Odyssey-TV (Canada Wide), Ant1 Satellite (USA) and Ant1 Pacific (Australia) Greek Television Broadcasts on the occasion of the visit of the Deputy Minister of Foreign Affairs, Gregory Niotis, to the Greek Community of Montreal and the schools. And as you will see in the footage, ALL the media in the community attended the coverage of this visit, and talked about it for a month!

If the Greek Minister had visited the Community Schools today, thanks to the incompetence of the HGCM’s Public Relations Office and it’s campers, such reporting and promotion of the schools would not have been possible and the event would have gone unnoticed. The so-called HCGM Publicist would have grated himself exclusivity to do “the job” on the fly by himself, with a tiny amateur snapshot in his newsletter that no one cares about, and instead of the media promoting the schools through new reporting, it would be overshadowed by cacophony, harsh criticism and whining about HCGM’s “closed doors” policy, and secrecy.

With community leaders responding with attitude: there’s none so deaf as those who don’t want to hear! or if worst comes to worst, the chairman of the Board to shout a “Shut up” to anyone who does not obey… as he recently ordered journalist Soula Tellides.

As it stands today, the HCGM Public Relations office is discrediting the Greek Community, and needs a complete reformation. It’s a total embarrassment. Incompetence at it’s best.

This evil cannot continue any longer! 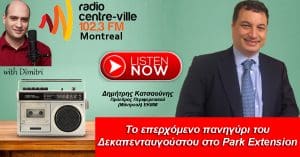 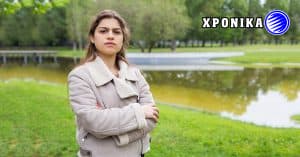 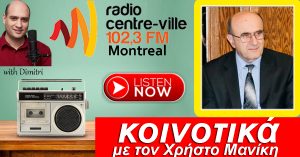 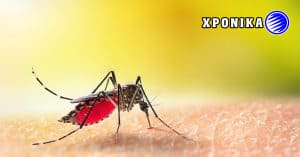 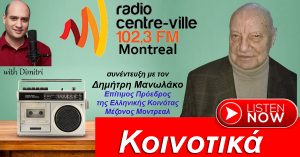 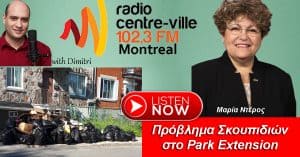 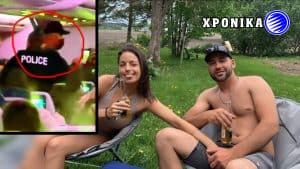 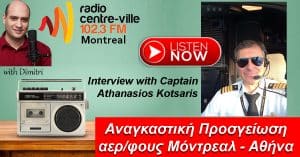